Don’t be a “Child”: How to Deal with DCAA Auditors 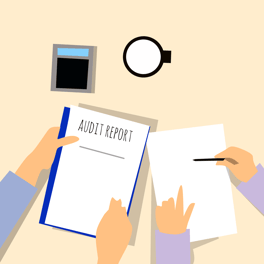 Undergoing an audit can be stressful and time consuming. While you may feel like the auditor has all the power, the fact is, you actually play a big role in how your audit unfolds.

Certainly, contractors need to be prepared with the appropriate documentation, and it is important to be professional, respectful, and courteous. However, it is also important to realize that there is such a thing as being too agreeable.

Let’s take a look at the psychology that fuels the auditor-contractor relationship, some tips for helping your audit go smoothly, and two real-life case studies of audits gone awry.

Understanding the psychology of the auditing process

The Defense Contract Audit Agency (DCAA) provides accounting and financial advisory services to the Department of Defense (DoD) and conducts audits on behalf of the DoD and other government agencies.

A DCAA auditor plays a powerful role in the contracting process, and he or she could make a difference in whether or not your business will be awarded a contract. It is the auditor’s job to assess your company’s ability to perform the contract in question. While the auditing process is governed by guidelines, personal dynamics can affect how audits transpire.

All DCAA auditors are expected to be unbiased and professional; that said, they are only human. Consider the bestselling book “Games People Play,” by Eric Berne, M.D., which presents his theory of Transactional Analysis, a form of psychotherapy in which a patient’s social actions are analyzed to determine his or her ego state and to devise ways to alter that state to improve emotional behavior.

With this in mind, contractors should rebuke the role of Child and instead behave rationally and calmly. That has the effect of altering the perceived relationship, changing the dynamic to one of Adult-Adult rather than Adult-Child. By striving to make all interactions with the auditor logical and analytical, you can help to eliminate potential conflicts before they arise.

Be prepared and courteous but not overly submissive

By being prepared for the audit and having all the required information ready to go, you will demonstrate that you are taking the process seriously and are respecting the auditor’s authority. A good starting point is DCAA’s Information for Contractors, a website that provides information and resources on the DCAA audit process.

That said, do not volunteer information beyond what is asked of you. If an auditor asks you for something that is outside the scope of the audit, you do not need to share it. Think carefully about how you respond to the inquiry. Remain polite and respectful, while demonstrating your understanding of the process. For example, try a statement like: “You must be asking for this for a reason. Would you mind sharing with me why you brought this up at this time?”

Just as auditors are human and not without flaw, so, too, are contractors. It can be challenging to remain calm and collected, especially when you feel like you don’t have control of a situation, and when an important government contract is on the line.

On a contract pre-award audit many years ago, our controller was asked within the first 15 minutes of the DCAA auditor’s arrival for a five-year projection of costs. The controller did not realize that this is only required of large contractors in an audit of forward pricing rate agreement proposals. The controller, in true Rebellious Child fashion, quipped, “What is this five-year plan you’re talking about? It kind of sounds to me like the old Soviet Union, where their-five year plans always failed.”

The auditor, incensed by this remark, asked the controller to rise from his chair. Then he invaded his personal space by getting just six inches from his face, wagging his index finger and sneering: “I am half Italian and half American Indian, so you don’t fool (the auditor actually used a different four-letter word that begins with the letter “f”) with me, do you understand?”

Certainly the auditor was out of line here (as if his genealogy should explain away his anger issues…), but the controller was, too. Rather than responding with a wisecrack, the controller should have calmly asked for clarification. For example, to avoid the contentious situation, the controller could have said something like: “I am confused by your request for a five-year cost projection. My impression is that you are here to conduct a pre-award survey of the adequacy of our accounting system, and I have prepared for that in advance of your arrival.”

Let’s take another example of an audit in which the contractor’s team failed to get to an Adult-Adult level with the auditor. Our client’s CFO was undergoing a particularly long and difficult DCAA cost audit. In her words, it was “the audit from hell.” It got to the point where she was willing to provide anything the DCAA demanded—she had assumed the role of Cooperative Child. When the auditor asked for the corporate minutes from their last board meeting, she dutifully retrieved the relevant document and handed it over, even though she knew it was not a standard request.

This CFO was trying to be compliant, but when an auditor asks for something out of the ordinary, it is appropriate to ask why. In this case, the CFO could have avoided the frustrating exchange by saying, “That is an interesting request. Could you explain why you are asking for our corporate minutes so I can better understand what information you expect to find in that document?”

Remember, when a representative of the DCAA acts like a Controlling Parent and asks for information that seems out-of-the-ordinary, you do not have to react by becoming the Rebellious or Cooperative Child. Instead, bring your interactions to an Adult-to-Adult ego state by asking clarifying questions in a polite but firm manner. This will help your audit go more smoothly.

Are you concerned about DCAA audits?
Sympaq Accounting Software has all the reports you need to stay compliant.