The Evolution of Timekeeping Methods for Government Contractors 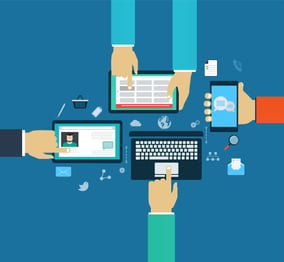 Through the years that we have been in the business of providing automated solutions designed for labor-intensive Government Contractors, compliance with DCAA's timekeeping rules (see SF1408, 2e) has spurred technological innovations more than in any other discipline. Paper timesheets have long represented a simple but not ecologically friendly way for your workforce to record time against direct and indirect cost objectives.

Timeclocks (aka punch clocks) have been around for generations as a way to automate starting and ending time entries on a "timecard" to enable hourly workers to clock-in and clock-out. By the early 1990's, prior to the World Wide Web becoming popular, "electronic" timecards made their debut and represented a major advance for computerized time entry based on the presumption that your workforce had access to a computer, and that it was interconnected by a wide area network to your employer's local area network for remote employees. This usually resulted in a mix of some employees at government sites using paper and others entering time via a desktop computer, provided the computer was a PC.

Electronic timekeeping quickly gave way to new technologies with the rise of the Internet, and by the late 1990's, the first Web-based timesheets became available. While eliminating a need to access an internal computer network to input time, Web-based timesheets that were accessible through a browser in lieu of a WAN or a VPN still had some drawbacks. For one, the makeup of your workforce may not include employees who have access to a computer. Staff members with a desk job equipped with a PC are not a part of daily work-life on the shop floor or in a warehouse. The concept of lining up employees at the end of the work day to enter their time via a kiosk computer meant providing specialized training on the timekeeping software to those unfamiliar with computer technology and potentially paying overtime to those waiting their turn in line. You may as well just use paper time cards or timeclocks for these folks.

For another, employees located at government facilities with access to government furnished equipment such as desktop computers may for security reasons find themselves blocked from accessing non-authorized websites, including their employers' Web timekeeping system. That brings us to today - or actually to about a decade ago - when smart phones were quickly rising in popularity and mobile flip phones were rapidly on the decline. The introduction of the iPhone in 2007 and its widespread adoption followed by other competing "smart" phones gave those without a computer as part of their job an efficient method to enter time, regardless of the aforementioned factors that in some cases made paper a better alternative to automation. As downloadable apps became available or mobile friendly sites have been rolled out by software vendors over the past several years, DCAA compliant timekeeping on a hand-held device has made it possible for all employees to enter, submit and even recall time entries. Now more than ever, employees on travel or without access to a computer at work can enter time on a daily basis and leave the hardcopy paper timecard in the past. The only remaining drawback to paperless time entry is having to be a location with access to the Internet, but it is increasingly rare when that isn't the case.

SYMPAQ eTX can be accessed by desktop or by mobile device. To learn about how its mobile capability, here is a short video for your viewing pleasure: Government contractors must go above and beyond routine requirements when it comes to reporting and regulations. Read the Blog

I was a featured guest at a book launch event that provided me the opportunity to ask the question, How does bidding on a firm fixed price job fundamentally differ from pricing a cost-reimbursable con[...] Read the Blog