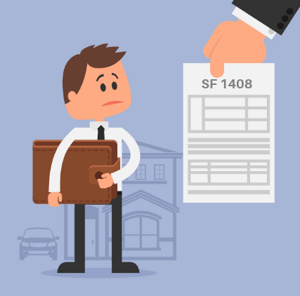 Most of the time, if an entity submits a proposal outlining a request for a cost-reimbursement contract, the DCAA will be contacted by a contracting officer. This offer will put in a request for the company's accounting system to be audited. As part of the process, the Standard Form (SF) 1408 accounting system survey will have to be completed.

It is not uncommon for Requests for Proposals (RFPs) to be unclear as to what the government is requiring. Still yet, understanding RFP requirements is absolutely paramount to submitting proposals successfully.

The SF 1408 is mostly used when a company has recently entered into doing business with the government for on a flexibly priced basis. This especially applies when a company is new to cost-reimbursement contracts. The SF 1408 involves an evaluation with respect to the design effectiveness of an accounting system to accumulate and report costs. Often, the accounting system isn't even fully operational when the SF 1408 survey is completed. Completing the SF 1408 doesn’t require any type of transaction testing, making it much more efficient than other types of assessments.

To ensure you are able to complete the SF 1408 successfully and be in a position that you can be awarded prospective contracts, you will need to ensure your system meets the following criteria.

You must have controls in place that "preclude the direct charging of indirect expenses and vice versa." It will be extremely helpful if you can create a flowchart that outlines the expense transactions that stem from purchase requisitions. It will need to provide a clear picture of the purchase orders those transactions correlate with as well as their receiving documents. When you have received an invoice from the vendor, you will want to include it as well.

Your indirect costs must be accumulated in logical cost groupings. It's best to ensure you have a system in place that allows you to detail how those indirect costs are being grouped in pools. You'll also need to have the ability to show a current general ledger trial balance, and this balance must match your chart of accounts.

Your timekeeping system must not only be able to identify employees and keep up with their hours, but it must also connect those hours to the appropriate cost objectives. Most times, your cost objectives will correlate with a specific contract, but it could also be an independent research and development objective, an indirect charge, bid and proposal effort , or a paid or unpaid absence.

While keeping an adequate timekeeping system may seem simple, a lot of contractors struggle with this. Ideally, though, employees’ hours will be kept in an electronic format and will be categorized according to the project they are working on.

There are many other aspects to consider when completing the SF 1408, including whether your system has a labor distribution system and whether it can perform:

There are several common mistakes that contractors make that disqualify them from being awarded prospective contracts. Standard Form 1408 has at least two items that directly address the contractor's procedures regarding the allocation of labor. When contractors fail to record all hours worked, this can actually lead to a contractor overcharging the government by charging the full salary for a period for an exempt worker across fewer hours.

In an attempt to keep this from happening, government entities prefer not to work with contractors who do not have a system in place that properly identifies uncompensated overtime hours for exempt employees. In addition, they want the contractor’s system to appropriately disclose unpaid hours. If there are changes to the assignment of labor costs, this can deter a government entity from wanting to work with a contractor. All contractors should make sure their labor distribution documentation is being traced back to the actual timesheets that have been signed by their employees; this applies whether it be an electronic signature or a pen-and-paper signature.

To learn more about SF 1408 and being compliant with your government contracts, review our demos.

For the dreaded upcoming tax form filing season that begins in January, you likely will be pleased to know that unlike with the past two tax filing seasons Read the Blog

When it comes to your business systems and related audits, you may be surprised to know that such systems extend beyond your accounting/financial system. Read the Blog

Cloud versus On Premise: Is there still a debate?

I was having a conversation recently with an individual who was inquiring about our latest client acquisitions, and the question was posed about how many were being hosted in an Azure cloud data cente[...] Read the Blog